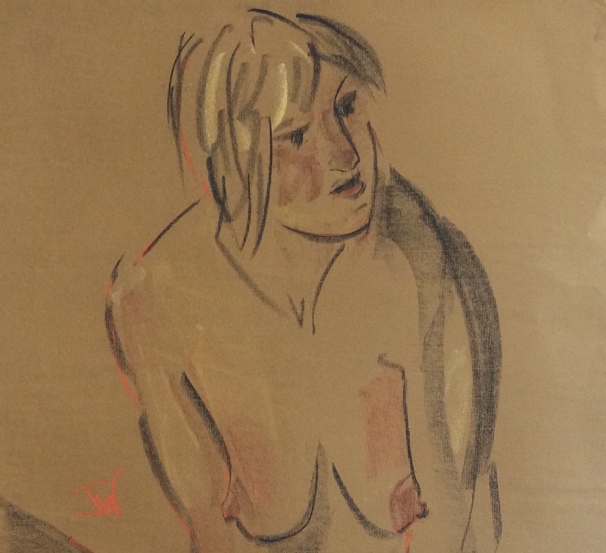 But Judy  became an artist by accident. She went to an art class just to give moral support to a friend who was too shy to go alone. The class was being run by the sculptor Heather Jansch (muse and ex-wife of guitarist Bert Jansch), who handed Judy sheet of paper, stuck a piece of charcoal in her left hand - and told her to join in.

“I’m rubbish at drawing,” said Judy. Accepting no excuses, Heather just told her to get on with it. When Judy, who is normally right-handed, switched the charcoal to her right hand, Heather told her to put it back in her left.  “If you really are rubbish it won’t make any difference.”

So Judy began moving the charcoal over the paper - and a finely proportioned drawing of a woman flowed out. Judy was so taken aback that she rushed out of the room. “It felt as though someone else had done it, not me”.

Spooky, inexplicable, but this new found ability to work almost effortlessly with her non-dominant hand soon became irresistibly compelling. Judy credits it with “changing my personality from uptight to unbuttoned”.

EXCLUSIVE - Judy Wheaton’s work was shown for the first time at our show in November 2014, followed by an exhibition at Burgh House in Hampstead in January 2015.

We are showing a few samples of her drawings here.